Trinity and the virgin

Trinity and the virgin 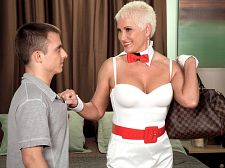 Four people are sitting at a bar, two guys, two girls, all of them on the youngish side. One of the guys tells Ivan that a girl across the room is checking him out, but he has eyes for the mature waitress.

“You know those kind of women drive me nuts,” young Ivan says. “I love them.”

“Ivan, that woman is old enough to be your mother,” one of the girls says.

Ivan already knows that. Then Trinity walks over to take their order. She’s wearing a short skirt and a tight top. Ivan can barely get his order out of his mouth. He mumbles something about sex on the beach. Trinity thinks he’s cute.

“Aren’t you twice his age?” one of the girls says.

Trinity takes him back to her place. She’s going to show him the ropes. She tells Ivan that he’s going to fuck her.

Trinity has him eat her pussy and suck her huge clit. Trinity’s pussy is good for beginners because her clit is easy to find. Then she sucks his cock, careful so he doesn’t bust a nut too quickly. And then, she has Ivan fuck her pussy.

Believe it or not, Trinity used to work at a brothel in Nevada, and one of her clients was a virgin.

We knew there had to be something in it for her.