The GILF, the dick pic and the big, black cock

The GILF, the dick pic and the big, black cock 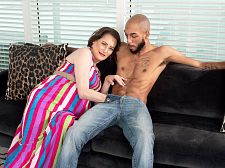 Renee Kane, 60, is cleaning up around the house and can’t believe the mess her daughter has made. Then she hears a phone vibrating, but it’s not her phone. It’s her daughter’s phone, so she picks it up and looks at the screen.

“Lisa! What is this? Oh my god, who is that? Somebody has sent you a dick pic!”

Renee isn’t mad. She’s impressed. The dude has a really big, black cock and Renee wants some of that. So instead of texting back, “Stop sending dick pics to my daughter, perv,” she texts back, “Come on over!”

Of course, she doesn’t tell the dude that it’s her daughter’s mom who replied and he’s shocked when this sexy, mature woman answers the door.

“Lisa’s not home right now,” Renee says, “but I am. I saw a picture of you. Would you like to come in and wait for her?”

He comes in, but they’re not going to do any waiting. Renee wants to see that dick in-person and fast, so she takes it out and sucks that 24-year-old cock and then she fucks it.

WARNING: If you send a dick pic to a woman, there’s no guarantee that what happens in this scene will happen to you. Chances are, she’ll show it to her friends and they’ll make fun of you and word will get around that you’ve been texting dick pics. But if you’re lucky, really lucky, this might happen.