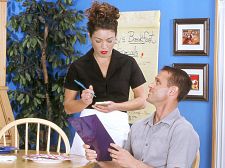 Raven, 40 and divorced, wouldn’t call herself kinky. She isn’t into any fetishes. But she’s definitely one tough mature woman.

Chances are very few guys say no to Raven.

“I don’t have any sexual fantasies, but I know what I want,” she said. “I want a man who isn’t going to be nervous or intimidated by me and be aggressive when my head is saying no and my body is saying yes. The guy who fucked me in this scene knew what I wanted and gave it to me.”

Watch and find out.

See More of Raven at GRANNYGETSAFACIAL.COM!