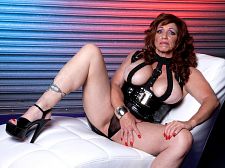 Sheri Fox takes her long, sexy red hair and big tits to a bathroom, where she gets her tits out of a Latex dress in a hurry. Actually, her tits are never really in the dress, which is good for Sheri because she loves to pinch her nipples, and doing so is a lot easier when they’re not covered.

Judging by Sheri’s loud moans of delight, she’s enjoying herself. Sheri, who’s 52 and from Central Florida, is one of those women who can enjoy herself when she’s with a man or by herself.

In this video, we get some great angles of Sheri’s big tits and some very intimate looks at her funkily pierced pussy. Then we get to see her paddle her pussy, which is something you don’t see too often. She slides the edge of the paddle between her pussy lips, she moans louder, then she slaps her pussy harder.