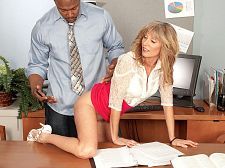 She came to The SCORE Group with her daughter. Both of them got naked, but only Jessica fucked. While her husband’s sitting at home, Jessica is getting her tight pussy pounded by a giant black cock.

“And loving it,” Jessica helpfully pointed out.

Here, Jessica has been called into the H.R. manager’s office at work. It seems Mr. Stone has been receiving complaints from Jessica’s co-workers about her inappropriate attire. Short skirts. See-through tops. Fuck-me pumps. No panties. You gotta figure Jessica’s jealous female co-workers are the ones doing the complaining, but Mr. Stone has a job to do, and today, he’s terminating Jessica’s employment. In regular-person speak, that means he’s firing her.

Well, Jessica isn’t going to take this lying down. Actually, she is going to take it lying down, but first she’s going to get down on her knees and suck Mr. Stone’s big, black cock, then she’s going to lie on his desk and have him fuck her shaved pussy. Clearly, this isn’t appropriate behavior for an upper-management employee of a company, but wouldn’t you fuck Jessica if you had the chance?