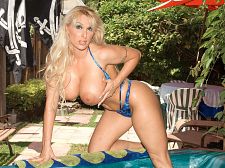 Confession time: Holly Halston isn’t Fourty. This babe is 33. But she’s a man’s wife, she’s fucking another gent and we thought u might adore that.