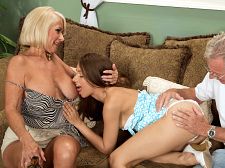 Soon, Georgette’s hands are all over the teen’s tits and pussy, and when the husband comes back, the action really starts.