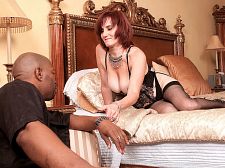 “One of the wildest things I’ve done?” said Debi, a 50-year-old divorcee from Las Vegas who has done a lot of wild things. “I’m not going to name names, but you know the MTV Video Music Awards? I fucked one of the guys who was a presenter. We were fucking in a broom closet, and they were calling for him to go on, and he literally had to pull his cock out of my pussy and stuff it back in his pants to go out onstage to present an award. He had on these tight pants, and you could see his hard-on, and he had this big shit-eating grin on his face.”

See More of Debi at GRANNYLOVESBBC.COM!