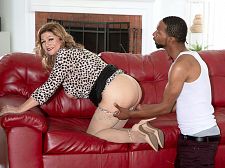 “Generally, I am sexually assertive,” said Brenda Douglas, a 67-year-old newbie from Oregon. “And I truly love it when my partner takes the dominant role and scripts our entire play together, surprising me with a new position, a request or perhaps a role-play scenario.”

“I find that when I’m single, I have a lot more fun,” said Brenda, who got divorced about 10 years ago. “I’ve had a great 10 years. I have tried many things, things that I never thought I would do. You open yourself up more, and sex is really the centerpoint of my life.”

Brenda has sex several times a week. She has “a fantasy about an incredible encounter with several men who take me on a pool table.” We’ll tell you right now that Brenda had sex with two men at the same time while she visited us. But that’s a story and a scene for another day.

“I am into all things sexual,” she said.

We asked her if she’s had sex with much-younger men, and she said, “I lived near a Marine base for a time. Enough said!”

How does Brenda dress when she’s out and about?

“Always sexy,” she said. “Satin, lace, leather, metallic outfits and faux fur. Included in my closet are lots of high-heel shoes and sexy, high-heeled boots. Sometimes I’ll wear stockings, heels, a skirt and a sexy top. Occasionally I will put on only a sparkly bra, G-string, boots and stockings, then I’ll put on a coat over it and go shopping!”

Alert to clothing store security guards: Keep your eyes out for Brenda!