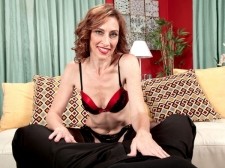 Betty Blaze, a 43-year-old newcomer from California, hasn’t been paying attention to her man recently, so she’s going to make it up to him. You know this is going to be good. She’s wearing sex lingerie, a little bra to cover her little tits, a little thong with a garter belt and stockings. She’s thin and curvy. To get things started, she puts on a show, first displaying her ass, then spreading her legs so we can see her ass and pussy. She shows that she’s flexible, too, doing one of those splits that cheerleaders do (but they usually do them with panties on). Then, still doing the splits, she resumes playing with her pussy.

“Touch my pussy,” she tells her man.

Betty is skinny, so her pussy is very prominent. You don’t have to go searching for it. It’s right there!

Of course, man can not live by pussy show alone, so Betty gets between his legs and sucks and jacks his cock. She has excellent technique. You would definitely want to get a blow job from this woman, but if she did nothing more than jack your dick? That would be okay, too. Not as good, but okay.

Betty is 5’8″ and weighs 124 pounds. She used to drive an ambulance. She has also been a ballet teacher, a bookkeeper and a postal worker. She’s a swinger.

“My boyfriend introduced me to it a year ago,” she said.