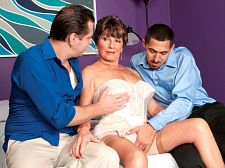 Bea Cummins once said, “My fantasy is to have sex with two or three fit young men and let them have their way with me.”

So, when Bea returned to our studio, 67 years old and looking sexier than ever, we made her fantasy come true. Here’s Bea, one of our most popular ladies ever, with John and Juan. John is 29. Juan is 27. They’re two of our biggest and our best, and Bea deserves them.

But the question is, did they have their way with Bea or did Bea have her way with them?

“I couldn’t help it,” Bea said when we pointed out that, at times, she became the aggressor. “It’s not every woman who gets to have her fantasy fulfilled at age 67 while the whole world watches.”

Including her husband. Yep, Mr. Cummins was sitting just a few feet away while John and Juan fuck his wife. Nice guy.