An offer no man could refuse

An offer no man could refuse 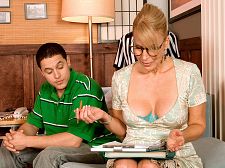 “My kids are always saying to me, ‘Mom, you’re so boring. Why don’t you loosen up a little?'” said 50something California housewife/MILF Erica Lauren. “They’ll never know the truth!”

“I always knew I loved having sex while people watched,” she said. “But over the past four years, I’ve discovered that I also love having sex in front of the camera, and the naughtier and nastier the better. Deep-throat blow jobs, DPs, getting fucked in the ass, sucking my ass juices off of a nice, hard cock…I’m down for all of that. Of course, my children don’t know about my secret life. They still think I need to loosen up a bit. But I don’t know how that’s possible.”